Fraxinella. A hand-coloured engraving from 'Hortus Eystettensis' (The Garden of Eichstatt), presumably from the first edition of 1613. Basil Besler published the earliest large folio botanical, 'Hortus Eystettensis', at Eichstatt near Nuremburg, in 1613. He worked on the 374 copper engravings with a team of ten artists and engravers over a period of sixteen years using the plants in the extensive garden of his patron Bishop Johann Conrad von Gemmingen. Depicted in this florilegium were European flowers, herbs and vegetables as well as newly discovered plants such as tobacco and peppers from Asia and America. This 150 years before the creation of the Linnaean classification system. 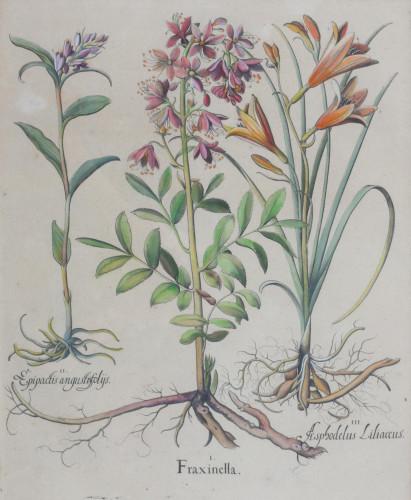