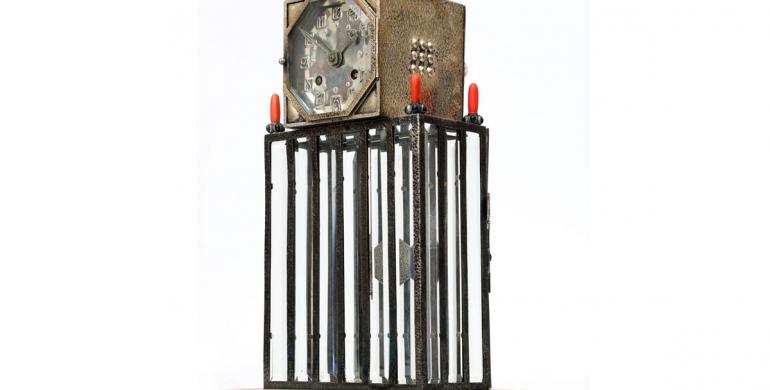 On the 25th of June we sold an important table clock by Josef Hoffmann (1870-1956) in our Design auction. It was sold for the hammer price of €205.000,-, one of the highest amounts ever for a Hoffmann piece sold at auction. It concerns a glass and silver plated metal model with details of semi-precious stones and coral ornaments, lot number 52.

The clock was designed by the Austrian architect and designer Josef Hoffmann and produced by the silversmith Karl Kallert. The piece was made in the famous workshop of the Wiener Werkstätte, which had been founded only a year earlier in 1903 and included members such as Egon Schiele and Gustav Klimt. The founders of this workshop, besides Josef Hoffmann himself, were Koloman Moser and financer Fritz Wärndorfer. In 1902-1903 Wärndorfer had already ordered a music room for his Viennese villa from the Scottisch architect and designer Charles Rennie Mackintosh, one of the most famous representatives of the Arts & Crafts movement. The influence of Mackintosh is clearly visible in the design of the hands of the clock. Moreover, the clock was produced only shortly before the construction of the Palais Stoclet in Brussels would commence in 1905, a building which is generally considered to be the opus magnum of Josef Hoffmann. The towers of this magnificent piece of architecture show a resemblance to the clock, which can be called an architectural object in itself.